The Daily Ant hosts an intermittent ant film series, Theatre Thursdays. This is the fourth installment, by our Film Correspondant Derek Langston. Enjoy!

Six-legged Celluloid Presents…
A review of Them!: “We like big ants and we cannot lie, you vertebrates can’t deny!” 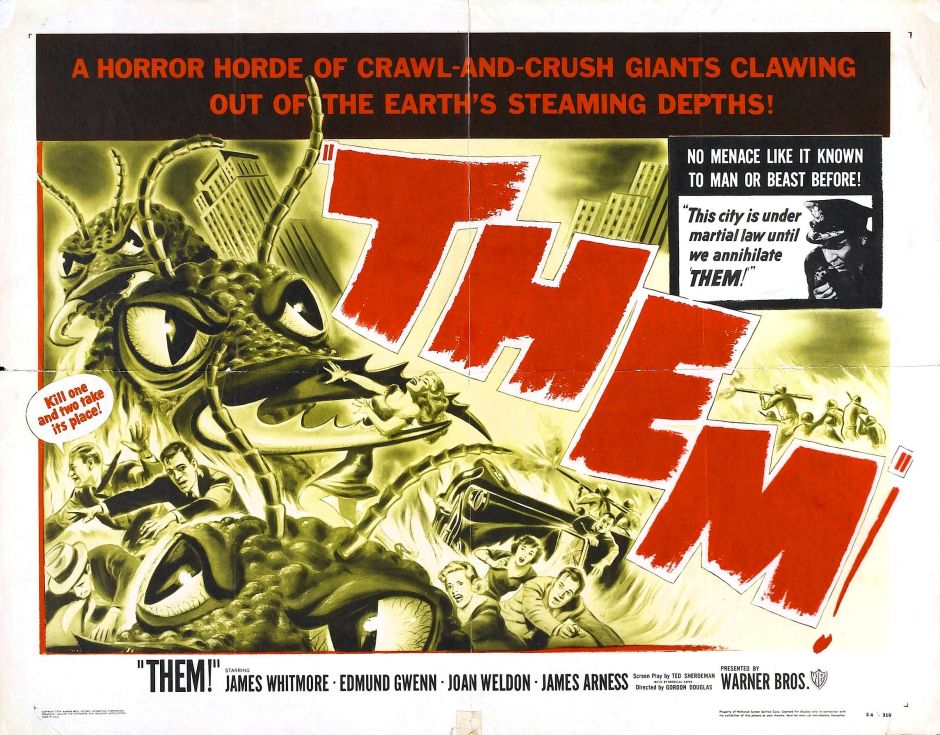 To my faithful readers and fellow cinematic antficianados, I wanted to both reward you, and thank you for your patience as you suffered with me on my previous 2 trials by film. At last, I present an ant centric film that will not make you want to pull off your geniculate antennae! Them!, released by Warner Bros in 1954, was one of my favorite giant creature features to watch when I was growing up. After my first viewing of the original Gojira (USA release Godzilla, also from 1954, also about an atomically enhanced creature), I watched a lot of really terrible kaiju and giant insect films, most of which were instantly forgettable. Them!, however, stood out as a shining example of a monster melodrama that was clearly a labor of love and not just stamped out of some generic mold to capitalize on the current film trends.

The film was produced by David Weisbart (who had an affinity for “giant things” as evident by his producing of Them! as well as A Street Car Named Desire, which starred Marlon Brando…) and directed by Gordon Douglas, who directed In Like Flint (starring James Coburn as Derek Flint, great name!) and worked with the likes of James Cagney and Gregory Peck. The cast includes dad who always has time to play catch with you James Whitmore (winner of 3/4 EGOT, minus the O); human skyscraper James Arness, who would go on to play in Gunsmoke as Matt Dillon for 20 years (John Wayne recommended him for the role after seeing Them!, showing that it is not always a terrible career move to star in a formically centered film (see my previous 2 reviews for counter examples)); and actress who likes to watch cowboys shoot each other Joan Weldon of Maverick (starring my childhood hero James Garner) and Have Gun Will Travel fame (starring Richard Boone, who voiced Smaug in the animated version of The Hobbit directed by Rankin and Bass and produced in part by the company that would later become the famed Studio Ghibli)*.

The synopsis of the film is this: A young semi-catatonic/mute girl is found wandering in the desert, her family is missing (for those only here for the ants, you will have to wait patiently until the 13:10 mark to get your first glimpse). Her family’s RV is discovered, having been broken apart from the inside out. Local police discover evidence of giant ants, though this is unbeknownst to them at the time (The aedeagus kicking doesn’t start until around the 28:10 mark, when the giant ants finally appear to give the pesky vertebrates “what for”). An FBI agent is brought in, and the bureau seeks the aide of 2 myrmecologists who confirm the presence of atomically mutated giant ants (anternative fact: this film contains the earliest known reference to “myrmecologists” in history). The police, FBI, and military then team up to bring down the monstrous myrmecia, with the tale taking us from the deserts of New Mexico, to the sewers of LA for a climactic underground battle. (Side note, the little girl’s aphonia is eventually cured with, and I am not making this up, an application of … ant acid).

Another thing this film does much better than my 2 previously reviewed films (Empire of the Ants ’77, and *pukes a little into mouth* Destination: Infestation 2007), especially when you consider the time it was released, were the special effects. “Them” utilizes practical effects such as animatronics/puppetry with full sized models, rather than relying on Empire’s method of filming ants as they crawl around on the slides inside of a 5 year old’s Classic ViewMaster 3D, or Destination’s creative pairing of MS Paint and Windows Movie Maker. I have always felt that practical effects allow for a better suspension of reality and more immersive cinematic experience (see practical effects versus any use of stop motion/blue screen/green screen/rotoscoping/cgi in cinematic history).

Now I know what you are thinking, they made a mistake right? Once again the ants are cast as the bad guys?! Really? Well, for all the things this film does right, there are still plenty it gets wrong.

Aside from the obvious mistake of casting ants as the villains, they also make a major formic faux pas. During a briefing to the military by one of our “heroic” myrmecologists (for what exactly a “myrmecologist” is, see my 2nd film review) the ants are mislabeled as males. Yes, I know, but remember that this was the 50s, when gender was still binary and female ants were aggressively encouraged to stick to reproduction and the gathering of food stuffs. Sadly, that is not all. At the 30:35 mark we hear the stridulation (had to look that one up) of the giant ants, which is used to dramatic effect to precede their physical onscreen presence. Apparently, there was a shortage of talented ant voice actors in ’54 as even the stridulation was outsourced, and was actually produced by some abomination known as a bird-voiced tree frog, with the sound sample coming from Cornell’s Lab of Ornithology. One should not be surprised by Cornell’s involvement in ant cultural appropriation, as they are apparently still hung up on this topic (see this Cornell study for further examples). To be fair though, even the vertebrate actors suffer some outsourcing, as a stock piece of audio known as the “Wilhelm scream” is used when the ants give the humans their comeuppance (the Wilhelm scream was also featured in Star Wars and Temple of Doom, both by little known director George Lucas and starring even lesser known carpenter turned actor Harrison Ford).

What Them! does well is create a sense of atmosphere and dread, from the first encounter with the wandering young girl, the first attack during a wind storm in the New Mexico desert (Them! made New Mexico cool way before you, Breaking Bad!) which is heard rather than seen, to the propaganda-inspired shots of military preparedness, to the final battle in the claustrophobic LA drainage channels.

In closing, if you are looking for a respectable creature feature, starring some talented young formic actors, and a sufferable cast of vertebrates, then I recommend giving Them! a chance. I give Them! 4.5 atomically infused aedeagi out of 5.

*Fun fact, speaking of The Hobbit: Them! also stars Leonard Nimoy in an uncredited role, who gave us this Hobbit-centric musical gem. 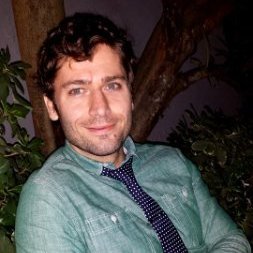 Derek Langston was born in Georgia and currently lives in North Carolina, but was a long time resident of the Midwest. Derek shares a residence with his wife, Rose Langston, who is also a contributor to The Daily Ant. He graduated with a Doctorate of Physical Therapy from Northwestern University in 2010. He divides his time between his hobby of Brazilian Jiu-jitsu and watching T.V./films. He recently decided to intentionally pick up the pen after decades of being an avid reader and fan of cinema. He has also accidentally picked up the pen a few other times in the past, for example here and here.