The Daily Ant hosts a weekly series, Philosophy Phridays, in which real philosophers share their thoughts at the intersection of ants and philosophy. This is the sixtieth contribution in the series, submitted by Dr. Julia Driver.

“While conducting research in Europe I came across the following, which I have transcribed from a manuscript found between the pages of an antiquarian book on household management entitled SELF GOVERNANCE.  It appears that this is [Bernard] Mandeville’s first attempt to convey his ideas via a fable or a parable.  This version was rejected in favor of THE FABLE OF THE BEES.  However, it is obviously the case that Mandeville also had great admiration for Ants.” — Julia Driver

THE PARABLE OF THE ANTS
THE Rustling Nest: OR, Virtue needs Vice

A meand’ring nest, provision’d with ANTS
Wandering thoughts, restless cants
Engaged the idle, but virtue reigns
Amongst the enterprising, peace obtains.
Tho’ peace is weak that is not policed
By those with hearts of avarice,
Who plot and toil to guard the nest,
For profit plain, forget the rest.

The nest is only safe with fight,
Greed and envy, keep the light,
The snake will seek to ruin the nice
The only guard a private VICE
Our hero ant will seek its death
And cry no tears, nor give him breath.

Ants, industrious, straight, and wise,
The nest, say sages, paradise.
An even mix of good and mine
The ANT sees, and all is fine.
Suppose a nest in virtue grue
And banish’d vice, became too few,
Yet every part was full of virtue,
The whole a chaos, without the glue
Of avarice, cheats, emoluments,
There was not an ant who whose own two cents
Did not go to help his fellow ants,
Til, alas, they helped each other dance,
Each other to the very grave,
By the hand of the invisible knave.

Our VIRTUOUS nest is doomed to grieve
For publick good requires to weave
Some vice with virtue, so we say
New sages, ANTS, present the way. 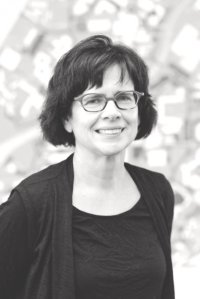 Dr. Julia Driver is Professor of Philosophy at Washington University in St. Louis.  Her research interests lie in Ethics, Metaethics, and Moral Psychology.  She received her Ph.D. from The Johns Hopkins University. She is Vice-President, and President-Elect, of the Central Division of the American Philosophical Association. She is currently working on a book manuscript entitled Minimal Virtue.