The Daily Ant hosts a weekly series, Philosophy Phridays, in which real philosophers share their thoughts at the intersection of ants and philosophy. This is the thirty-sixth contribution in the series, submitted by Dr. Eric Schwitzgebel from one of his publications.

On the surface of a planet around Antares lives a species of animals who look like woolly mammoths but who act much like human beings. I have gazed into my crystal ball and this is what I see: Tomorrow, they visit Earth. They watch our television shows, learn our language, and politely ask to tour our lands. It turns out that they are sanitary, friendly, excellent conversationalists, and well supplied with rare metals for trade, so they are welcomed across the globe. They are quirky in a few ways, however. For example, their cognitive activity takes them on average ten times longer to execute. This has no overall effect on their intelligence, but it does test the patience of conversation partners unaccustomed to the Antareans’ slow pace. They also find some tasks easy that we find difficult and vice versa. They are baffled and amused by our trouble with simple logic problems like the Wason Selection Task (Wason 1968) and tensor calculus, but they are impressed by our skill in integrating auditory and visual information.

Over time, some Antareans migrate permanently down from their orbiting ship. Patchy accommodations are made for their size and speed, and they start to attend our schools and join our corporations. Some achieve political office and display approximately the normal human range of vices. Although Antareans don’t reproduce by coitus, they find some forms of physical contact arousing and have broadly human attitudes toward pair-bonding. Marriage equality is achieved. What a model of interplanetary harmony! Ordinary non-philosophers all agree, of course, that Antareans are conscious.

Here’s why I call them “antheads”: Their heads and humps contain not neurons but rather ten million squirming insects, each a fraction of a millimeter across. Each insect has a complete set of minute sensory organs and a nervous system of its own, and the antheads’ behavior arises from complex patterns of interaction among these individually dumb insects. These mammoth creatures are much-evolved descendants of Antarean ant colonies that evolved in symbiosis with a brainless, living hive. The interior insects’ interactions are so informationally efficient that neighboring insects can respond differentially to the behavioral or chemical effects of other insects’ individual outgoing efferent nerve impulses. The individual ants vary in size, structure, sensa, and mobility. Specialist ants have various affinities, antagonisms, and predilections, but no ant individually approaches human intelligence. No individual ant, for example, has an inkling of Shakespeare despite the Antareans’ great appreciation of Shakespeare’s work.

There seems to be no reason in principle that such an entity couldn’t execute any computational function that a human brain could execute or satisfy any high-level functional description that the human organism could satisfy. All the creativity of literary interpretation, all the cleverness of humor and weirdness of visual art, should be available to the antheads on standard materialist approaches to cognition.

Maybe there are little spatial gaps between the ants. Does it matter? Maybe, in the privacy of their homes, the ants sometimes disperse from the body, exiting and entering through the mouth. Does it matter? Maybe if the exterior body is too severely injured, the ants recruit a new body from nutrient tanks – and when they march off to do this, they retain some cognitive coordination, able to remember and report thoughts they had mid-transfer. They reconvene and say, “Oh it’s such a free and airy feeling to be without a body! And yet it’s a fearful thing too. It’s good to feel again the power of limbs and mouth. May this new body last long and well. Shall we dance, then, love?”

We humans are not so different perhaps. In one perspective (e.g., Maynard Smith and Szathmáry 1995) we ourselves are but symbiotic aggregates of simpler organisms that invested in cooperation. 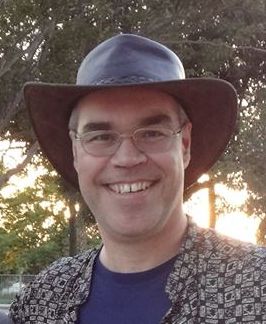 Dr. Eric Schwitzgebel is a Professor of Philosophy at University of California – Riverside. He has published extensively on the nature of attitudes (he thinks you’ve gotta walk the walk), self-knowledge (he thinks we stink at it), the metaphysics of consciousness (he’s skeptical about all existing approaches), and metaphilosophy (he’s liberal about what counts as philosophy, and about who can and should do it and how). His most recent book is Perplexities of Consciousness. He blogs at The Splintered Mind. For more on Dr. Schwitzgebel, see his interview in 3:AM Magazine.