The Daily Ant hosts a weekly series, Philosophy Phridays, in which real philosophers share their thoughts at the intersection of ants and philosophy. This is the thirty-ninth contribution in the series, submitted by Joshua Blanchard.

The Metaethical Implications of Myrmecology

Metaethics is the subfield of moral philosophy having to do with the metaphysics, epistemology, semantics, and psychology of the moral domain. Whereas familiar questions of normative moral philosophy include, “What are the basic moral principles?” and “Do the basic moral principles demand that I move to Canada?”, a representative question in metaethics would be, “Is morality objective?”

Metaethics is often confused with myrmecology, but for administrative purposes it is essential to keep the two apart. Myrmecology is the subfield of natural philosophy having to do with the smallest of animals – ants. In what follows, we will consider what myrmecology tells us about three debates in metaethics.

Now, what does myrmecology tell us about whether moral assertions express beliefs? Nothing at all. For example, in a classic study of ants, the influential enemy of philosophy E.O. Wilson looked at the division of labor within two species of fire ants. The division of labor among ants is not wholly unlike the division of labor between different sorts of mental states – e.g., the beliefs and preferences we mentioned above – in the sense that we can use the term “division of labor” in both cases. But there is just no way that fire ants might organize themselves that would have any implications whatsoever for the debate about cognitivism and non-cognitivism in metaethics.

No wonder the job market is so bad – there’s nothing left for us to do!

For more on cognitivism and non-cognitivism in metaethics, see Mark van Roojen’s entry in the Stanford Encyclopedia of Philosophy.

Some metaethicists believe that it is not possible to fully account for moral phenomena in naturalistic terms. These are non-naturalists. Take any number of “natural” phenomena – desires, cultures, pleasure and pain, rational agreements, and so on – and non-naturalists will say that morality cannot only be understood in those terms. The moral realm is in some way separate from, or goes above and beyond, the stuff that we ordinarily associate with the natural world – especially, the stuff that is the object of empirical inquiry.

Our beloved enemy of philosophy once referred to a certain ant from the Brazilian Amazon as “the ant from Mars,” because it is, according to Nature, “so bizarre.” This has nothing to do with the debate between naturalists and non-naturalists in metaethics, because the sense in which the offending ant seems not-of-this-world is completely unrelated to the sense in which some philosophers think that moral phenomena seem not-of-this-world.

For more on the debate about non-naturalism in metaethics, see Michael Ridge’s entry in the Stanford Encyclopedia of Philosophy.

Those philosophers who think that there are moral facts that we can know face the problem of explaining how such knowledge is possible, and in what it consists. This problem is especially acute for non-naturalists, because many non-naturalists think of moral facts as involving something above and beyond the sorts of phenomena with which we causally interact. If you think that moral facts are just natural facts about what we desire, for example, then there is no special problem of moral knowledge: our knowledge of moral facts becomes a species of knowledge about desires. This is why many non-naturalists, most notably intuitionists, have posited a unique cognitive faculty for grasping moral truths. While the need to develop a special epistemology is often understood to be a theoretical disadvantage for non-naturalism, one should note that there are other areas of human knowledge that seem to involve facts that aren’t available to ordinary, empirical inquiry. For example, we seem to know many logical, mathematical, and conceptual truths, none of which causally interact with us in any obvious way. So, when placed in the context of human knowledge more broadly, the sense of a special problem of moral knowledge might begin to evaporate.

The recent paper by Benjamin Blanchard1 and Corrie Moreau, “Defensive traits exhibit an evolutionary trade-off and drive diversification in ants,” lacks implications for the nature of moral knowledge, and it is very easy to illustrate this with an itemized list of nothing:

For more on moral epistemology, see Richmond Campbell’s entry in the Stanford Encyclopedia of Philosophy.

In conclusion, we have looked at some of the implications that myrmecology has for metaethics. The intersection between myrmecology and metaethics is a fruitless area of research that is guaranteed to generate zero results for generations to come.

1Note: Benjamin Blanchard is my great-grandfather and the editor-in-chief of this newspaper. 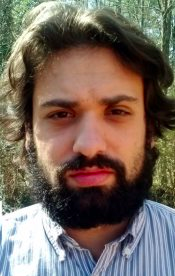 Joshua Blanchard is a doctoral candidate in philosophy at The University of North Carolina at Chapel Hill. He specializes in ethics, epistemology, and the philosophy of religion. Joshua is also an Executive Producer of the award-winning Philosophy Phridays series in The Daily Ant.