The Style Invitational, The Washington Post’s weekly humor/wordplay contest, draws witty, funny entrants from all over the English-speaking world, including the mother of The Daily Ant editor-in-chief. Unfortunately, I haven’t heard much lately from Judy Blanchard, but for a few years she was an Invitational phenom, “getting ink” 107 times.

And one of those times was for one of the “Invite’s” many neologism contests, in which you coin a new word. The 2011 contest asked entrants to take a real word, then move its first letter to the end – and define the result.

Could it have been her son’s passion for ants that prompted her to come up with “Nthilla: A grain of sand”? What a nifty joke in that short definition, evoking “nth,” for ultra-, as “to the nth degree”; “scintilla,” the tiniest amount; and the grains of sand that often form anthills.

Like the ant itself, it packs so much into a wondrous little package.

By the way, The Style Invitational still comes out every week; even if you don’t do contests, the results are always fun to read. See them here, and to get a weekly email with a link to each new contest and results, contact me at pat.myers@washpost.com and I’ll happily add you to the list. And join the Style Invitational Devotees group on Facebook, and they’ll anagram your name. 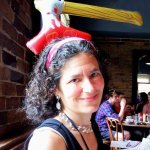 Pat Myers has worked at The Washington Post since 1982 and reigned as Empress of the Style
Invitational for more than 13 years. While she confesses that she is not in love with ants, she does have a Formica countertop in her kitchen.