The Daily Ant hosts a weekly series, Philosophy Phridays, in which real philosophers share their thoughts at the intersection of ants and philosophy. This is the sixty-first contribution in the series, submitted by Dr. Nathan Eckstrand.

The ant documentaries I saw as a kid showed brutal fights. Antennae drawn and mandibles bared, ants bit and pulled on each other to defend themselves, gain access to food, or take over another colony. Other nature documentaries were much the same; animals constantly fought one another for self-defense, resources, or dominance. Seeing so much antagonism left my younger self with one, clear message: nature is a pitiless place devoid of much compassion.

This type of interaction is often mirrored in how humans sometimes deal with each other, especially those we see as a threat. We often use violence, either to attack or for defense. We try to push others away rather than engage them, or dominate them so that they will obey us. As some philosophers would put it, we either want to reduce the Other (understood as the set of things that is not part of us) to the Self (that which is part of us) or ignore the Other by pretending there is only the Self. These tactics fail because most of our self-knowledge requires the existence of others. We learn about ourselves by looking to those around us. Research demonstrates this in several ways. First, Developmental Psychology says that a sense of self cannot exist until one understands that they occupy a specific place in the world, and thus their perceptions are not the only possible ones. Next, as children grow they begin to identify their perceptions of their body with themselves while identifying people’s faces as belonging to separate individuals capable of feeling the same sensations they do. Scientists believe that until such distinctions exist, no separation is made between oneself and the world. Finally, research shows that one’s self-knowledge comes in part from observing how others display emotions, prefer different things, and convey their desires. These facts show that having a concept of the self requires a concept of others, and that much of our knowledge about ourselves comes from observing different people. In a very real way, we exist only because others do.

That said, we rarely want to be the same as others; rather, we want to have a distinct self and be recognized for this. Having a sense of self is meaningless if it is not recognized by others. In other words, we reject objectification in order to be seen as who we are, not as what others want us to be. The frustration we often have in receiving this recognition shows why denial and domination are common ways of responding to the Other. As long as we pretend the Other is not there, we don’t need to worry when they don’t acknowledge us.

Returning to the topic of ant behavior, myrmecology has uncovered some fascinating ways ants have overcome their initial rejections of the Other. The phenomenon of supercolonies shows ant nests ceasing hostility to work for a common goal. Ants within the same supercolony never act aggressively towards one another, preferring a more collaborative relationship. This is true even when ants are from different nests within the supercolony. (Scientists know that ants in a supercolony recognize when they are from different nests, for such ants will not mate with one another.) According to one study, “colonies harboring the most common recognition cues will experience a selective advantage because they fight less often with neighbors and are more productive.”1 Yet aggression does not disappear, as supercolonies can be hostile towards one another. Even if ants from different supercolonies are removed from their environment and placed in a lab, the aggression will continue, suggesting that it is produced by traits the ants recognize in each other.

Some argue that supercolonies are not the byproduct of other natural forces, but are themselves advantageous enough that ants have recognized their value. If true, it means the loss of aggression is itself preferable, rather than it being the product of something else. As one paper puts it, “Although until now supercolonies were viewed as a byproduct of other processes, we propose that the adaptive value of avoiding the costs of aggression is so strong that under appropriate ecological conditions, it will promote the elimination of territorial aggression.”2 The authors conclude that a stronger role for cooperation seems to be forming within ant communities, which in turn is helping them to survive and grow.

The development of supercolonies illustrates the preferred outcome that philosophers have described in reference to the Self-Other relationship. Ignoring the Other proves fruitless, for whether we like it or not we are always connected to them. Dominating the Other may have some limited success for a time, but it too will ultimately fail. Any attempt to make the Other into the Self removes from them the independence they need to recognize who you really are. Without the existence of an Other, you are only engaging in a process of self-description, not having your self affirmed by an external being with which you can interact. The only way to avoid these failed outcomes is for the Self and the Other to each recognize both parts of the relationship (i.e. both the Self and the Other). We must also admit that the Self and the Other are constantly interacting, whether we realize it or not.

The phenomenon of supercolonies provides a nice vignette of the constant position we find ourselves in. While ants lack the concepts of Self and Other, they have recognized a danger of holding to a sense of Self and denying the Other. With supercolonies, they have begun to be more inclusive of ants with different backgrounds. We could learn something from this: there are many human groups that have trouble accepting others in a reciprocal relationship. Though ant fights have not disappeared, ants have overcome earlier groupings that separated them from others. Can we perform a similar move, and overcome the classifications that keep us from working together?

1“Evolution of supercolonies: The Argentine ants of southern Europe” 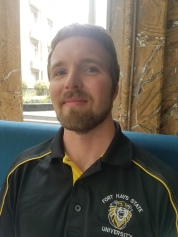 Nathan Eckstrand is a Visiting Assistant Professor at Fort Hays State University. Right now he is teaching in Zhengzhou, China, where some places are as crowded as an ant colony. He got his PhD from Duquesne University in 2014 after defending a dissertation on the philosophy of revolution (a concept he secretly wonders if ant workers ever contemplate). He specializes in social and political philosophy, race theory, gender theory, and continental philosophy. He is an Associate Editor at the APA Blog.